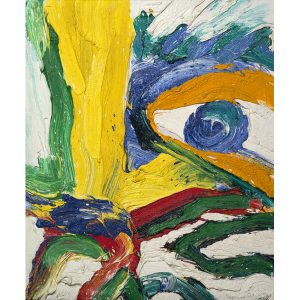 Bengt Lindström is a Swedish painter, lithographer and sculptor. He was born on September 3, 1925 in Storsjökapell. After studying art at the Academy of Stockholm, he began practical training at the painting school of Isaac Grünewald, himself a pupil of Henri Matisse. Then he travels to Copenhagen and Chicago. Enriched by his encounters, Lindström decided in the 1950s to settle in Paris and let his talent express itself there. At that time, he moved towards a less figurative but more colorful pictorial expression.
The execution of his works is characterized by the use of large buckets of pure colors. He executes works in full paste and seems to sculpt the painting. The artist also makes use of canvases stretched on a frame that he works on the ground.

Although he was often formally associated to CoBra, Lindström prefers to compare his touch to Emil Nolde or Edvard Munch.
The subjects of his works are shaped around folk art, Saami mythology and consequently the world of the far north. His affinities with Scandinavian culture and spirituality come from his childhood. After growing up in the wilderness of Lapland, the artist was quickly overwhelmed by the myths and legends of the surrounding populations.

“I consider that the role of the painter is to astonish those around him, to disturb them, to lead them into a different world in order to escape from this sad and material life that man himself has created”.
Bengt Lindstrom

Lindström participates in numerous group exhibitions in France and abroad. He passed away in his Swedish home in 2008.
A figurehead of modern art, Lindström is one of the most important icons of the Far North. His artistic heritage is recognized and acclaimed by collectors around the world.
The work Masque d’or is available for sale at the Mickaël Marciano gallery.