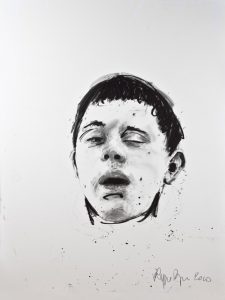 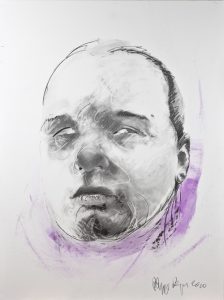 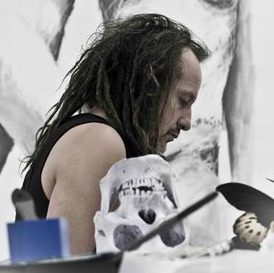 Philippe Pasqua is a French painter born in 1965 in Grasse. He has established himself over the course of an extraordinary career as one of the major artists of his generation. Inspired by Francis Bacon and Lucian Freud, Pasqua’s art is fascinating.  Voodoo and fetishes marked the beginning of his career.
His taste for the monumental goes hand in hand with an attraction for the most vulnerable: bodies and faces. With sometimes these stigmatizing differences that the artist appreciates. Through his painting, Pasqua takes these differences to his account and magnifies them. Portraits of transsexuals, people with Down’s syndrome or blind people… Handicaps, differences, obscenity or sacredness: each canvas is the fruit of a struggle, a tension between what is showable and “tolerated” and what is socially repressed or occulted.
“It is in the body, in the flesh, that the history of mankind, and perhaps even the history of art, is finally written” Jean Rustin explains about his painting. His painting is received as a physical shock but also as a vision that is both explosive and incisive. What commands the monumental format of his canvases is the amplitude of the artist’s gestures. A dance where brutality and finesse, trance and lucidity alternate.
These works can be found in the selection of the Mickaël Marciano Galleries.
Date:3 May 2018